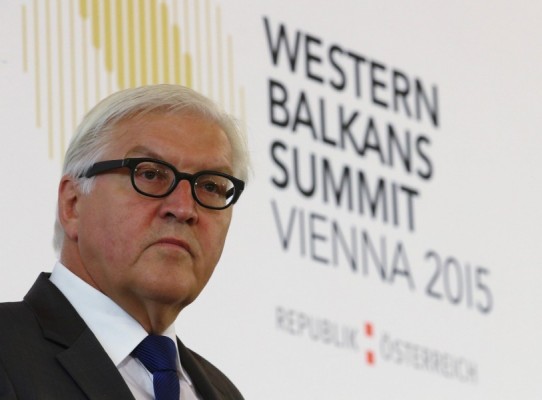 Thank you, Sebastian, for hosting this meeting. Before I will speak about the Berlin process, let me focus on a topic that I believe is of urgent concern to all of us: the refugee crisis.

We are facing a challenge of tremendous proportions. Never before in history have so many people fled their homes to escape war, violence and persecution. And given the large number of unresolved conflicts in our neighborhood, the stream of refugees seeking protection in Europe will not abate in the foreseeable future, I am afraid.

What do I mean by that? Firstly, I believe that it is our joint responsibility in Europe to help those in need. People fleeing from violent conflicts need our protection. And we must give it to them. That is our humanitarian duty!

Secondly, I believe that this crisis is a true test of what we actually mean when we speak of European solidarity. There is not a single country in Europe that will be able to tackle this challenge on its own. Therefore, close cooperation is of the essence!

If we want to live up to these core values of humanity and solidarity, it is imperative that we act now and adapt the way we deal with asylum and migration on our continent. I would like to highlight four aspects that are crucial in this respect:

Firstly, it is paramount that refugees are treated humanely, wherever their journey takes them. This includes both: destination and transit countries. Germany is aware that refugees travelling through Western Balkan countries put a huge strain on administrative capacities, on transport networks and on local communities. We will not leave you alone in this difficult situation. Germany will contribute up to one million euros to alleviate the situation of refugees in the Western Balkans. We are supporting Serbia and the former Yugoslav Republic of Macedonia in their humanitarian effort with 600 000 Euros, our focus is supplying refugees with food and hygiene items, as well as medical support in both countries.

Secondly, I believe we need a common European asylum policy. We must reform the Dublin system in order to distribute refugees fairly within the EU. That would also alleviate the burden on those Western Balkan countries that find themselves on the transit route between EU member states.

Thirdly, I believe we will only be effective in helping refugees in urgent need if we look closely at those asylum seekers who have virtually no chance of being accepted. In Germany, almost 40% of asylum seekers originate from the Western Balkans, from countries that are seeking accession to the EU! To reflect this reality – and to do the EU accession process justice! – I believe that we must come to an understanding that a country that is fulfilling all the criteria required of an EU candidate should be considered a “safe country of origin”.

But we also count on you, the governments in the region, to help manage the expectations of your citizens and provide them with a realistic picture of their virtually non-existent chances of being granted asylum in Germany. And finally, I believe that in the long run, migratory pressure will only be reduced if people can expect to find prosperity in their home countries. It is primarily up to the Western Balkan countries to stimulate growth and create jobs. Germany will continue to be a reliable partner on this path, both bilaterally and within the context of EU enlargement.

If we want to make progress in all these areas, one thing is key: close cooperation – not just between the European Union and the Western Balkans, but also within the region!
And we have good reason for optimism in this regard. Your countries have proved in the so-called “Berlin Process” what can be achieved through efficient forms of cooperation – in the areas of transport and energy infrastructure as well as regional youth exchange. It is now important that we move beyond the planning stage. People in the Balkans need to be able to experience first hand that travelling within the region is actually becoming less complicated!

But constructing roads and bridges will not be enough to bring your region closer together. The people of the region also need to grow closer together. So I am very glad that you have started work on a Regional Youth Cooperation Office – a project that will allow young people from all over the region to get to know – and hopefully – understand one another better.

The importance of the Berlin process extends far beyond its agenda. It highlights Germany’s commitment to support the Western Balkan countries on their path towards Europe. You can count on our cooperation and solidarity along the way.